Wikipedia, the popular collaborative free encyclopedia and other popular social media websites are  protesting against the Stop Internet Privacy  Act SOPA and Protect Internet Privacy Act PIPA  Laws by blacking out access to their websites for 24 hours, beginning at midnight January 18, Eastern Time. For example, readers who visit Wikipedia during the blackout will not be able to read the encyclopedia. Instead, they will be able to read  messages intended to raise awareness about SOPA and PIPA, thus encouraging readers to share their views with their political representatives, and hold open discussions with others on the role of social media.

Wikipedia provides information on SOPA and PIPA:
SOPA and PIPA represent two bills in the United States House of Representatives and the United States Senate respectively. SOPA is short for the "Stop Online Piracy Act," and PIPA is an acronym for the "Protect IP Act." ("IP" stands for "intellectual property.") In short, these bills are efforts to stop copyright infringement committed by foreign web sites, but, in our opinion, they do so in a way that actually infringes free expression while harming the Internet. Detailed information about these bills can be found in the Stop Online Piracy Act and PROTECT IP Act articles on Wikipedia, which are available during the blackout. GovTrack lets you follow both bills through the legislative process: SOPA on this page, and PIPA on this one. The Electronic Frontier Foundation, a non-profit organization dedicated to advocating for the public interest in the digital realm, has summarized why these bills are simply unacceptable in a world that values an open, secure, and free Internet.

Wikipedia also explains its role in the blackout:
Wikipedians have chosen to black out the English Wikipedia for the first time ever, because we are concerned that SOPA and PIPA will severely inhibit people's access to online information. This is not a problem that will solely affect people in the United States: it will affect everyone around the world.

Why? SOPA and PIPA are badly drafted legislation that won't be effective at their stated goal (to stop copyright infringement), and will cause serious damage to the free and open Internet. They put the burden on website owners to police user-contributed material and call for the unnecessary blocking of entire sites. Small sites won't have sufficient resources to defend themselves. Big media companies may seek to cut off funding sources for their foreign competitors, even if copyright isn't being infringed. Foreign sites will be blacklisted, which means they won't show up in major search engines. And, SOPA and PIPA build a framework for future restrictions and suppression.

Posted by Caribbean Connector at 12:16 PM No comments: 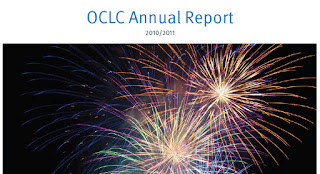 OCLC recently published its annual 2011 report to its membership. In the report, Jay Jordan, OCLC President and Chief Executive Officer commented that the economic downturn notwithstanding, libraries maintained their strong use of OCLC systems and services in fiscal 2011.

Here are some highlights of the report:

Members of the OCLC cooperative used OCLC to:

• perform 160.7 million click-throughs from partner sites on the Web to the WorldCat.org landing page

Jordan also noted that the cooperative’s strategic initiative to build new Webscale management services with libraries continued to grow. Thirty-seven libraries acquired these services in fiscal 2011, and 24 of them went live.

Link to the report
Posted by Caribbean Connector at 1:12 PM 4 comments: